It’s 2007 and YSL, Pierre Berge, Sonia Rykiel, Emmanuelle Khahn and myself, all old and wrinkled and not so fabulous anymore are all seated par hazard on the same banquette in Paris. We were all five, by accident, eating at the Brasserie Lipp. It’s impossible, but true. I thought I’d seen it all in my 50 years in Paris fashion, but this night was the magic moment for me, and I’m sure for the others. In French it’s called La Denoument. This evening proves that success and happiness is not all about money.

Here’s what happened. In early fall in 2007, Emmanuelle Khahn called me in my Paris shop at 21 Rue Bonaparte (like my new perfume) to tell me that she was retiring from fashion and wanted to celebrate alone with me. Could I meet her for a “verre” at the Cafe Flore and afterwards dinner at Lipp? I happily replied “Yes.” 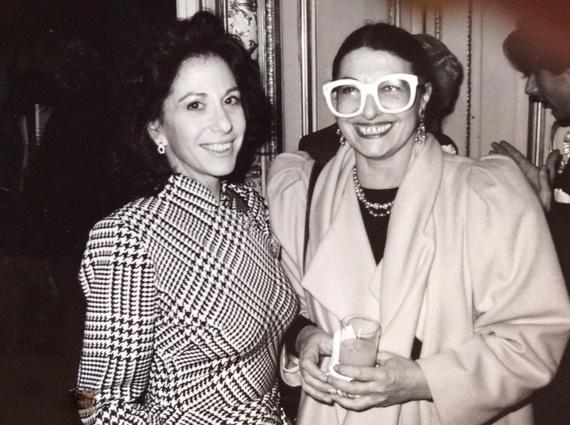 EMMANUELLE KHAHN ruled Paris socially when I arrived in Paris in 1964 with my partner, Mia
Fonssagrives. Since 1956 Emmanuelle was the top established young designer in town.
She created the new French Pret a Porter industry in the 50s because having been the top model at Balanciaga, she felt couture did not show enough body. With her sometime partner Christiane Bailly, the Ye Ye dress business began. Michelle Rosier (the daughter of Elle Magazine publisher, Helene Lazareff), and later Karl Lagerfeld (who was working Pret a Porter for maison Royaume) all began the fashion world as we know it today. Emmanuelle, who in 2007 was mostly known for her signature oversized white eyeglasses, was going to now close down shop designing dresses, and live off her eyeglass royalties and “enjoy life.”

As if she didn’t already enjoy life, Emmanuelle, (an ex Balenciaga couture model) had lived in a pink marble palace in the Paris suburb of Garches with her Vietnamese artist/inventor husband, Quasar Khahn. It was the scene of the most fabulous pink-champagne parties of the 60s and 70s. You had to wear pink jewel encrusted ball gowns on Saturday night to match the pink marble art deco decor and you would meet European fashion and art royalty, movie stars, Crazy Horse strippers and the newest pop singers. She was our Parisian hostess with the mostest, along with Marie Helene de Rothschild who had a more boring horsey crowd at her palace, the Hotel Lambert across the street from my home on Quai Henri 4.

Our 2007 E.K. retirement celebration night started at the Cafe Flore while devouring champagne, Emmanuelle, (now divorced) told me that she’s quitting because the Paris fashion industry has been destroyed by the takeover of the giant corporations who bought names to only brand them like cows and threw out the real designers. As we stared in the Dior window across the street on Place St Germaine de Pres, there were no clothes in the windows — only handbags and shoes and perfume. Fine clothing was no longer profitable. Fashion clothing was unsalable, it was only for an overblown show for the press and for creating a brand.

After drinks, we crossed the street and walked into Lipp where we were immediately seated on the far wall banquette, the top spot where Mr Caze put only the most famous celebrities and in-favor politicians.

We were early and were placed in the center of the red leather banquette. Emmanuelle ordered more champagne ( I drank lemonade)and we proceeded to discuss the last years of fashion insanity. While we roared with hilarious laughter, in walks a somber Sonia Rykiel and her boyfriend, who are placed next to us on the banquette. “Bonjours” are passed around with kisses on both cheeks and then more somber silence. Minutes later Yves St Laurent and Pierre Berge walk into the Lipp revolving door and they are placed on our banquette next to Sonia and her beau. All per hazard. A deathly silence without a “bonjour” from Yves and Pierre and they don’t ever talk to us or themselves.

Today I understand the significance of Sonia’s mood; she has recently revealed that since 2007 she could no longer hide her Parkinson’s Disease. But that night seven years ago she was so sad and miserable, and YSL was months away from dying. Everything was so sad to the right of me at the table that they felt like four souls who were waiting for an execution. I was told later by a fabric house salesman that we both shared, that the brilliant Yves at the end of his career drank an entire bottle of Scotch while buying fabric. That’s only two hours to drink an entire bottle. I had over my desk a photo of the great Yves and his French bulldog, Moujik leaving work on Avenue George V for the last time in 2002. His head was down. It was to remind me to work until I die, like Coco.

I was so saddened to see the miserable designers next to me, we never said another word to them, nor they to us. However, they could not stop Emmanuelle and myself from having a wonderful evening of story telling, memories, horrible press reviews, and laughing until we cried — even more so with the somber billionaires next to us!

Artists will all understand this story, they must. Fame and money do not buy happiness. Van Gogh and Rothko our most gifted painters killed themselves. L’Wren Scott just committed suicide. Artists understand they must tolerate suffering in order to create and few have ever been able to leave their craft, step back and smile with joy. I don’t understand why, but it must be as Lady Gaga sang, they are “Born that Way.”

Well, I’m still smiling. Today I sell copies of my 60s dresses on HSN TV. My next fragrance is called 1964 based on my 50 years on Paris fashion. I’m no billionaire, but I’m happy. So be it.